Back in August last year, Roarockit had just started up in Europe and one of our very first customers started with a phone call from the Uk. It was Chris, who was in the process of launching Hurtle skateboards.

Now, several months down the road, we are particularly proud to be able to interview and share the story behind Hurtle skateboards and what it has become today.

Q1: So Chris, tell us a little bit about yourself, where do you come from etc?

Hey! I’m from Exeter in the UK, I’m 24 and I am a skateboard addict. I’m the mind behind Hurtle skateboards, and when I’m not building boards I am usually either working in the local skate shop (Two Seasons in Exeter) or out practicing my cross steps and peterpans. My house is filled with boards, it’s becoming a problem…

Q2: When did you first get into skateboarding?

Later than most people I’ve met – when I was about 17 or 18. I just decided one day out of the blue that I wanted to learn to skate so I dug out my uncle’s old 70’s board (ACS 580s and old Gullwing ‘Wings’ wheels, damn I loved that thing!) and did lengths of the kitchen until I had the balance down. Then I took it to the park rode down the hills. I progressed from there to using a board to commute, then to doing day trips on them, until I found myself sponsored and pushing 1000km around The Netherlands. 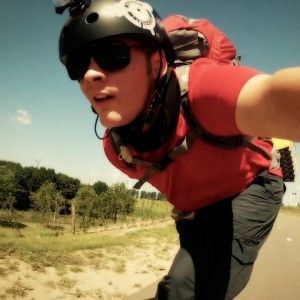 Have a video playlist https://www.youtube.com/watch?v=v4MTK7agr5U&list=PLMQAiuaHTi-vCSwwBMto-VMUHbDg4SBgS

A little while after that trip I injured my back and now I can’t push like I used to. Consequently I have dabbled with slalom, and dancing is the current favourite.

Q3: When and why did you start building boards?

That is a story that begins with the death of my uncle’s old board. When I was still fairly new to skating I had a rather spectacular crash whilst going down hill – minor concussion, cracked rib, snapped collar bone, dislocated arm and a healthy smattering of road rash. Worst of all though was the split in my uncle’s board, I was so upset.

I retired it (it’s on my wall now) and bought a longboard. Whilst I waited for my bones to mend I watched a lot of skate videos on youtube and encountered for the first time the concept of chopping a board that is not quite right to make it exactly what you want it to be. This idea stuck with me, and it wasn’t long before I chopped the tail of my longboard and shortened up the wheelbase.

That was the start really. I did numerous chops over the next couple of years, for myself and for friends. I also developed the habit of sanding down and redoing the graphics on my boards which everyone seemed to like. I loved it, tinkering away in my garage like some kind of mad scientist.

The first board I made totally from scratch was actually for my uncle, as a replacement for the one I’d crashed. It was made of cheap builder’s ply, rocker with no concave and made in the most ghetto press you’ve ever seen! I’m talking anvils, logs, bags of sand, many spiders, scraps of metal, bits of brick… anything with decent weight that happened to be to hand at the time went onto the pile to get the rocker on that board.

I carried on chopping, repainting and occasionally ghetto-pressing boards for another 2 years or so, and was getting a lot of praise for them. Just before I started Hurtle Skateboards it got to the point where random people I passed in the street would stop me to ask about my boards, and upon being told that they were home made would tell me I should be making them for a living.

So I’m giving it a swing! 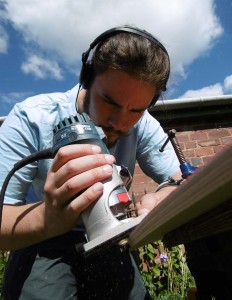 Q4: Where did the name « Hurtle » skateboards come from?

It came from the griptape on one of the custom chops I did just before I started the company. I had cut a little Hawaiian turtle graphic into the tape on the nose and became really attached to the little guy. When I was trying to think of a name and logo I remembered the turtle and thought he would be perfect. Rather than re-draw him I traced the exact turtle straight from the grip tape of that custom board and put it into photoshop (which is why if you look at my logo some of the lines are not quite perfect or of uniform thickness, and that’s the way I like it! Straight from the board!).

So there I was with a logo. From there it was just a case of thinking of a name that would go with it…

I spent a LONG time trying to source wood for my boards. I knew from the start that I wanted to use Canadian maple – nothing quite feels the same underfoot as a proper maple deck. It’s a strong material, with just the right amount of flex and great pop; it is ideal for building skateboards and it’s not just coincidence that all the big skate companies use it!

As for how I found Roarockit? Google. Google knows all.

Haha I had seen some of the stuff that Roarockit had done over in the states before I started Hurtle, and I remember seeing a dropped pin on Silverfish they had made that I found particularly stunning. It was just good timing that Roarockit EU was starting up at around the same time I was. They had helpful staff (Hi Sarah!) as well as plenty of maple veneer in conveniently skateboard sized pieces. Win/win.

Q6: You have just started up Hurtle Skateboards, how are things going so far?

Pretty well I’d say – going from the initial idea for the company to having boards in the shops in under a year is pretty pleasing! Things are progressing nicely. It’s so fulfilling to see people riding the boards I made and be able to say,

The reactions that my boards seem to get is also hugely encouraging – they are such lovely things to touch and see in person, pictures really can’t do them justice. Once someone has seen and handled one, the boards pretty much sell themselves (which makes my life a lot easier!)

I saw a sign somewhere the other day for a skateboard exhibition that said ‘ride my art’. I thought that was really clever and I’m annoyed I didn’t think of it myself, as that is exactly how I feel about my boards!

Q7: What are you working on now and what are your future projects?

Well I’ve just released the Halfshells, which completes my Origin series. I am planning a slight change to the 2015 Hawksbills but other than that I am really happy with my current 3 decks. 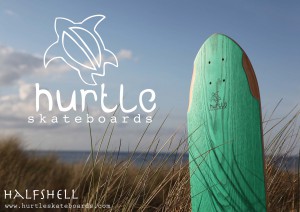 My current priority is getting my website refurbished and working with a Shopping Cart system to make buying my boards online much easier.

Beyond that, prototyping and testing is now underway for the ‘K.T. Series’ so keep an eye out for Hurtle boards with kick tails…

Lastly, I want a proper workshop. That is however currently a bit beyond my budget so I need to sell more boards first! 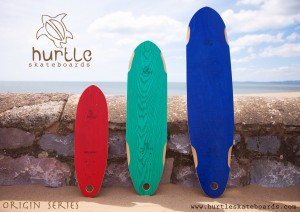 Q8: Anything else toadd?

I do need to find a lady skater for the Hurtle Skate Team, so if you know anybody…

Cheers for the interview!