It is a pleasure to present to you the work of Aad Terlouw from the Netherlands and his beautiful build of a carbon-epoxy fin keel for a controlled model sailing yacht, using the Roarockit Thin Air Press Technology! Thank you Aad for taking the time to share your experience with us! 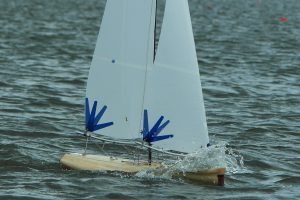 The wide range of applications of the Roarockit is shown with the construction of a fin keel by Aad Terlouw in the Netherlands for his radio controlled model sailing yacht.The fin with a length of 65 cm had to be light, stiff and strong and with a narrow airfoil cross section of about 6.5 mm wide.To achieve that goal he decided to go for an carbon-epoxy fin with a balsa wood core and to apply vacuum bag technology.
In spite of the availability of numerous industrial vacuum bag systems the favourable reviews of the Roarockit on the internet convinced him to purchase the Roarockit with a bag of 135*40cm.

The balsa wood core consists of 2 balsa planks of 3 mm thickness, each of them were given an one-sided airfoil-like cross section by accurate planing and sanding (photo below).After this shaping stage the two halves were glued together with epoxy in the Roarockit vacuum bag. 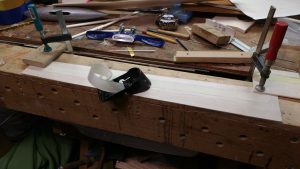 After consulting vacuum bagging expertise on the internet for similar projects Aad had concluded to replace the delivered breather net by a release film with closely spaced ventilation openings directly placed on the balsa fin core.On top of this film a bleeder cloth is needed to absorb excess epoxy.It is essential to keep the valve on the bag offset from your work as recommended in the user guide of the kit. 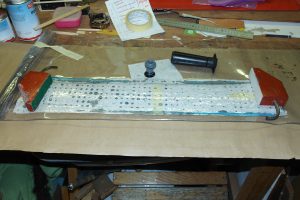 After drying the complete core was sanded down to about 4.5 mm thickness and in top and bottom inserts of small pieces of hard wood were glued for fitting the bolts for connection of the fin with the hull and the ballast lead later on.

Aad had decided to place three layers of unidirectional (UD) carbon cloth on both sides of the core. 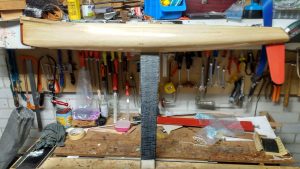 In order to obtain a stiff and strong fin Aad has applied carbon cloth of a high modulus of 240 GPA (steel abt 210 GPA) laid in three layers of different widths saturated with epoxy on both sides of the balsa core.The whole was covered again with release film and bleeder cloth and kept one night in the vacuum bag of the Roarockit with the valve kept offset from his workpiece.It was noted that the vacuum was maintained overnight quite well. 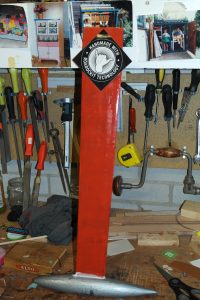 After drying the rough fin was further sanded and painted etc to the result as shown on the photograph above and the first trials with the fin in his modelyacht were completed successfully.The final weight of the fin was 185 gram. 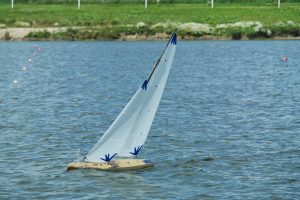 You can read more about Add Terlouw’s builds on this forum for model builders in Dutch.